Learning to read in Liberia

Fantastic Phonics works with a broad collection of charities and NGOs in Africa. In Liberia, we have donated the program to USAID (United States Agency of International Development) for a country-wide literacy project to lift the reading levels of grades Two and Three, ultimately in all schools in Liberia 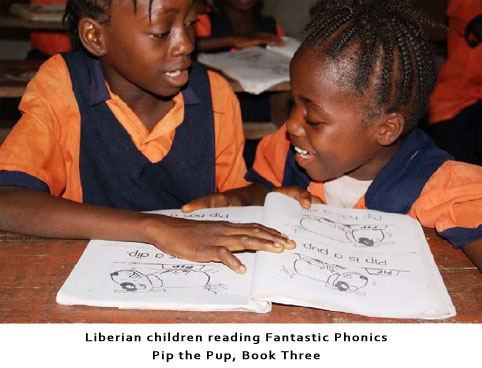 In 2008, USAID (http://www.usaid.gov) chose Fantastic Phonics to use in a reading intervention program in Liberia, on the West Coast of Africa, where 85% of the population is considered to be below the international poverty line.

The program, known as EGRA (Early Grade Reading Assessment), was designed to provide an evidence–based assessment to find the best methods of early-reading instruction. The research ran from 2008 – 2010 (3 years), and the outcome of the program was so successful that it has been extended to an additional 2300 schools.

The Liberian intervention is considered to be one of the most successful in the attempt to improve worldwide literacy. The research showed that "fluency of reading previously unseen words" was improved by 485%. This was an astonishing result, given the importance of this indicator - it measures reading and decoding speed.

Other Outcomes Approximately Liberian 200,000 children now use Fantastic Phonics. But it does not stop there. The program was extended to adult literacy, and a large number of other charities and social agencies have now requested the program.

Following this success, the program spread to Rwanda, Ethiopia and South Sudan through a network of aid organisations focused on improving literacy.